The Bates-Hendricks Neighborhood is located on the south side of Downtown Indianapolis with an active and vibrant group of homeowners making great strides to improve their community. The neighborhood offers affordable housing opportunities in the near south side of Indy.

One of the oldest neighborhoods in Indianapolis, Bates-Hedricks is rich in history. In 1821, the first sanctioned land sale took place in Indianapolis, including the plot that would eventually become known as the "Bates-Hendricks Home." This historic landmark was named after area banker, Hervey Bates and Thomas A. Hendricks, Indiana Governor and Vice President of the United States. The estate is listed on the National Register of Historic Landmarks.

Madison Avenue, the western boundary of the neighborhood, was the first road built into "Indian territory" to service the new state capital of Indianapolis. Surveyed in 1822 ,and completed in 1824, it also served as the stagecoach road to reach the steamboats on the Ohio River before the railroad came to Indianapolis.

In 1900, pharmacist John Hook opened the first Hook's Drug Store at the corner of what is now Prospect and S. East Streets. Although that building no longer exists, Hook's grew to be a chain of over 160 stores throughout Indiana, and is today part of the CVS Pharmacy chain.

The #18 across the street was built in 1901, and is on the site where a group of Delaware ISanders-Childers House on E. Palmer Street is one of the oldest houses in Indianapolis. Built circa 1830 by William Sanders, the original portion of the house sits at an angle to Palmer and Barth streets because those streets were not laid out until later. Alterations were made at various times, including a modernization in the 1920s by Frank R. Childers, Marion County Recorder from 1927 to 1930. The former Abraham Lincoln Schoolndians lived until 1820.[3] 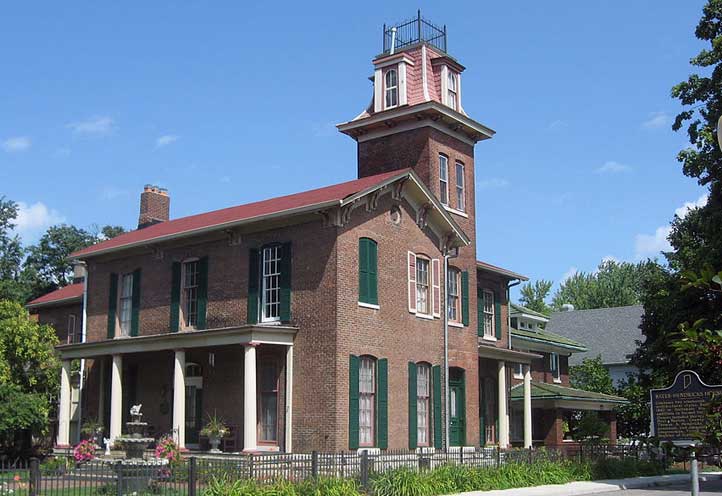 This up-and-coming neighborhood is bordered by Indianapolis' downtown commercial district to the north and west, and the redeveloped Fountain Square business district to the east. With an active neighborhood association and project grants from the Lilly Foundation, the Bates-Hendricks community is poised for growth.

Most of the neighborhood consists of one- and two-family homes with small front yards and larger back yards. There are two public parks: Hendricks Park, on Madison Avenue, and Garfield Park to the south. The Pleasant Run Trail cuts through the southeast corner of the neighborhood along the creek. The parkways on each side of the creek are part of the Indianapolis Park and Boulevard System designed by George Kessler.

The working-class neighborhood is close to numerous restaurants, businesses, and recreational facilities in Indianapolis. Cyclists routinely commute to Downtown via East Street's bike lanes, and with nearby access to I-65 and I-70, almost any location in Indianapolis is just minutes away.


Return to "Homes for Sale in Indianapolis Historic Districts"