Just southeast of Downtown Indy lies Fletcher Place Historic Distrit, one of the oldest neighborhoods in the city — and one of its best-kept secrets. Named after early settler, Calvin Fletcher Sr., the community boasts a variety of single-family homes, upscale condominiums, and small businesses. The Indianapolis Cultural Trail bisects the district along Virgina Ave. Unique, sleek and a standout in homes downtown! Amazing views, windows galore and style like no other. The great room offers a two-story fireplace, beautiful hardwoo... No finish left behind in this gorgeous Italianette newly built in 2020 to honor the original architecture in this historical neighborhood! Open the arched oversized ... This luxury condo comes with incredible views of the Downtown skyline. Strategically located with a short walk to Fountain Square and all of it’s restaurants and e... This Fletcher Place stunner will leave you smitten from first glance! This 1905 nicely-updated townhouse offers all the modern-day comforts, while maintaining the or... City views abound at this Lovely Historic Victorian just walking distance to all that Downtown Indy has to offer. 2 bed 2 full bath with 2 car garage in back. This w... Cozy bungalow located in the heart of Fletcher Place! This 2 bedroom 2.5 bath home is completely updated but still has the charm and character of an older home! Love... The neighborhood is comprised of mostly Italianate and Queen-Anne style houses. Landmarks include the Caito Bungalow, the William Forsyth home, and a house designed by architect Francis Costigan. Other notable buildings include the Union Laundry Lofts, built in 1911, the Calvin Fletcher School built in 1857, and the former Fletcher Place United Methodist Church built in 1872. One of the oldest homes in the area can be found at 601 Fletcher Ave. The three-bay brick Italianate house dates to 1866.

The area south of Virginia Ave. is listed separately on the National Register of Historic Places. This area, known as The Holy Rosary Danish Church District was originally settled by German, Irish, Scotch, and Welsh immigrants in the 1850s. By 1910, however, 90% of its residents were Italian Americans. In fact, the community is hailed as Indiana's largest continuously-occupied Italian neighborhood. Landmarks include Trinity Danish Evangelical Lutheran Church (1872), Horace Mann Public School (1874), and Holy Rosary Catholic Church(1911 - 1925). 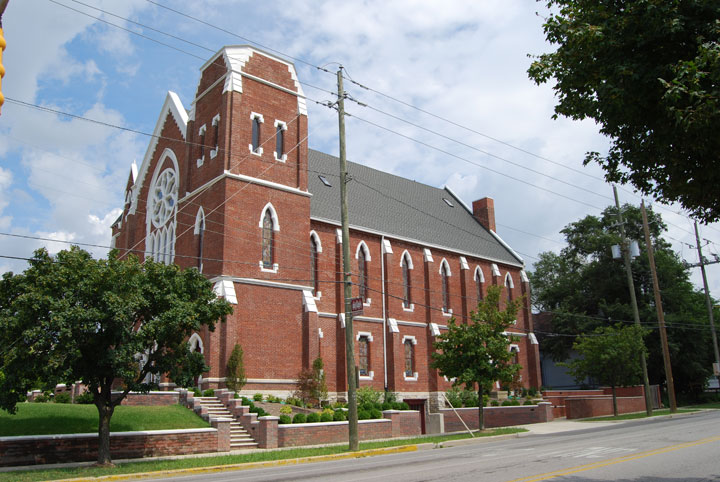 The former Fletcher Place United Methodist Episcopal Church at the corner of Fletcher and Virginia Avenues today offers luxury condo living in the 200-year-old Gothic Revival style brick building. Other condo conversions include the nearby ($30-million) "Villaggio at Page Pointe," "Fletcher Place Lofts" (formerly the Fletcher Place Community Center), and the former "Fletcher School" (circa 1857). These renovation projects are just a few of several that have sparked a wave of development in the neighborhood. More and more investors are renovating historic homes and converting old buildings into condos, leading to rising property values.

Calvin Fletcher's farm, "Woodlawn," originally encompassed most of the land in the district. Fletcher was not only the city's first attorney, but also served as Indiana State Senator, Trustee of the Indianapolis Public Schools, Trustee of DePauw University, Trustee of the Marion County Seminary, Chairman of the Free Soil Party Convention, and founder & president of the Marion County Agricultural Society. He later went on to establish the American Fletcher National Bank.

Fletcher was known as a fervent abolitionist who lobbied the federal government for the establishment of black troops to fight in the Civil War. He then allowed those soldiers to use his land for training. He died in 1866 from injuries sustained from falling off his horse.

In 1857, Fletcher platted off much of Woodlawn into individual lots. When the Citizen's Street Railway Company opened trolley lines here in the 1860's, large homes were built on Fletcher Avenue, with smaller workers' cottages built to the north and south. Virginia Avenue became the commercial thoroughfare, linking Fletcher Place with the Mile Square to the north and Fountain Square to the south.

Henry Laut opened one of the area's first grocery stores here in the 1870s. In 1892 Laut converted his building to a tinsmithing shoppe. It was here that he and his crew built many of the sheet-metal cornices and other detail work seen on many Indianapolis buildings today. Laut's building still stands on the corner of Fletcher and College, and is today known as Laut Sheet Metal Shops.