One of the brightest jewels in Indianapolis’ crown of great Indianapolis attractions is the Indianapolis Zoo. A world-class zoological garden, it is also the only such institution that also offers an aquarium and a botanical garden.

On top of that, the Zoo’s outreach program to the public is unparalleled. The Indianapolis business offers an enormous list of year-round special Indianapolis events and attractions, from the “Halloween ZooBoo” to the ever-popular Dolphin In-Water Adventure which allows the visitor to make friends with a real dolphin, one-on-one. 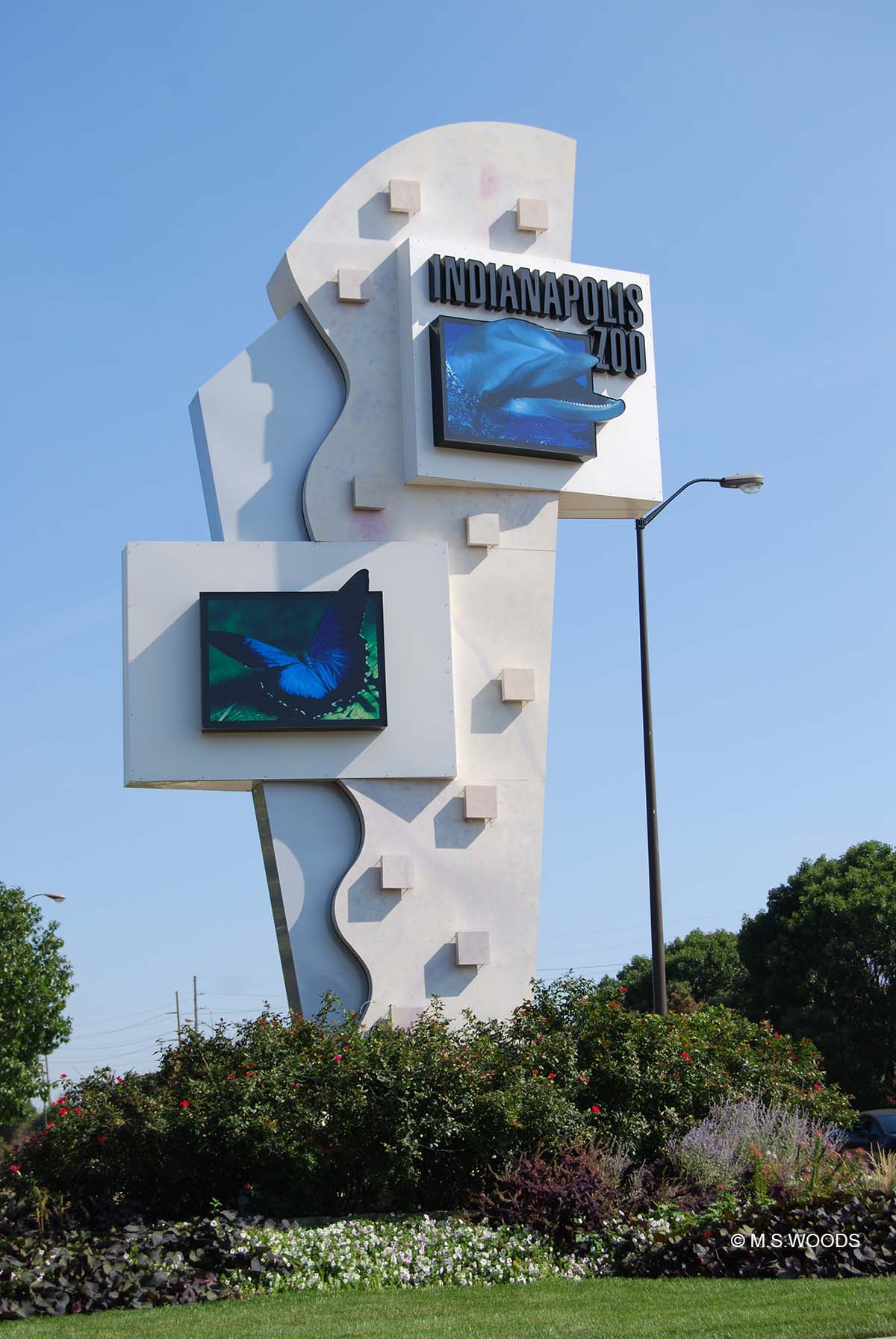 The Indianapolis Zoo is situated in one of the country’s most naturally beautiful areas, White River State Park, which is also the home of the Indiana State Museum, the NCAA Hall of Champions, Victory Field and the Congressional Medal of Honor Memorial, and the Eiteljorg Museum of American Indians and Western Art. Indianapolis locals and visitors gravitate to this lovely, high-energy sector of the busy metropolis. The area is also right in the middle of downtown Indianapolis, which hosts the famous Athenaeum Building and another major people magnet, Circle Centre Mall.

Every year, about a million and a half visitors come to enjoy the Indianapolis Zoo and the huge number of Indianapolis things to do it has, and the Zoo is able to entertain, educate and enlighten them all; it’s been a well-oiled people-pleasing machine since its inception in 1964. It has always been an Indianapolis non-profit organization that receives no tax support, but is instead funded solely by admissions, membership fees, sales, grants and donations, as well as an important annual fundraiser.

First and foremost of the Indianapolis Zoo’s many attractions is the large Dolphin Pavilion, which offers a performance pool as well as an interactive area where visitors can make a real-life connection with a dolphin in the water.

The Zoo recently installed the tall Underwater Dolphin Dome, which allows visitors to view the dolphins from underneath the surface of the water. On top of the water’s surface is the Marsh Dolphin Theater, which features a million-gallon plus pool, complete with a detailed coastal village scene. The dolphins perform in this friendly environment every day, for the delight of hundreds of their human friends.

The Indianapolis Zoo boasts the only in-water dolphin-human interaction program for the public in the entire Midwest. Here is where human meets this wonderful fellow mammal in its own watery home.

The Indianapolis Zoo Biomes are the habitat-authentic environments created to make the Zoo animals feel at home. The zoological exhibits are contained within these five different geographically divided biomes:

The Forests Biome – Inside this area, Indianapolis Zoo visitors can view endangered Siberian tigers, Asian otters, koala and Kodiak bears and many more creatures that dwell in forest habitats. 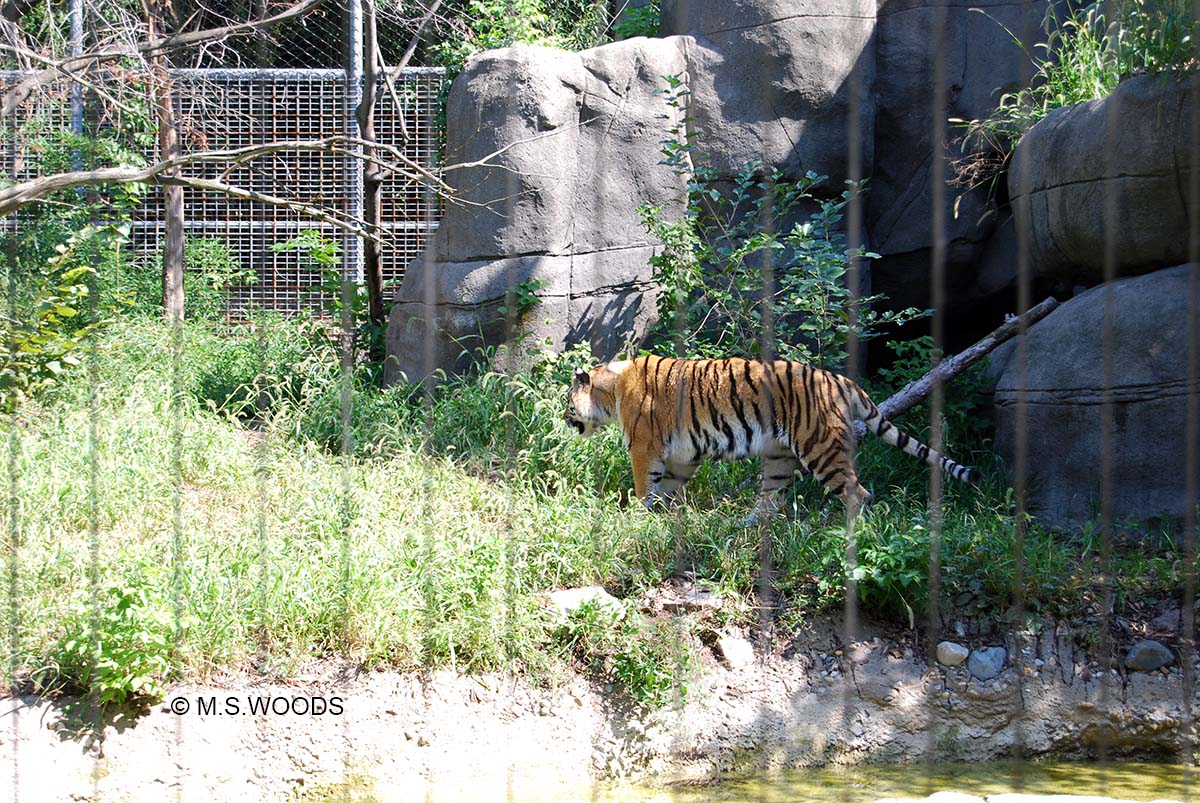 The Oceans Biome – Here is another fascinating interactive exhibit, which allows visitors to view penguins, polar bears, seals and sharks in the water, in addition to many other ocean-dwelling species. You can even touch the sharks in the Firestone Gallery’s shark-touching pool, the largest of its kind in the world. 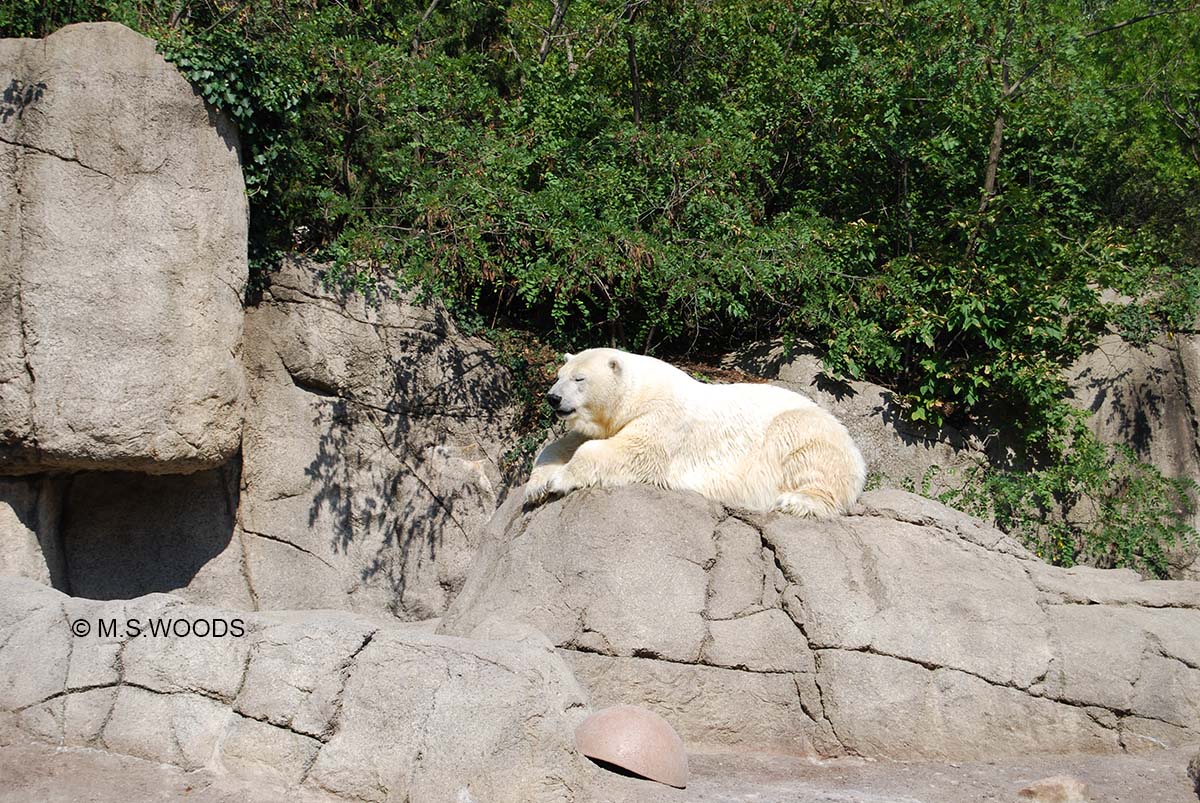 Polar Bear at the Indianapolis Zoo

The Deserts Biome – This habitat, exhaustively researched and reproduced, has the distinction of successfully breeding some of the world’s rarest reptiles, including the blue iguana from the Grand Caymans, long considered endangered. Completely climate-controlled to 80-degree temperatures year-round, this habitat is topped by a huge transparent dome of 80 feet in diameter, which allows the sunlight in for its reptilian residents’ comfort and delight. 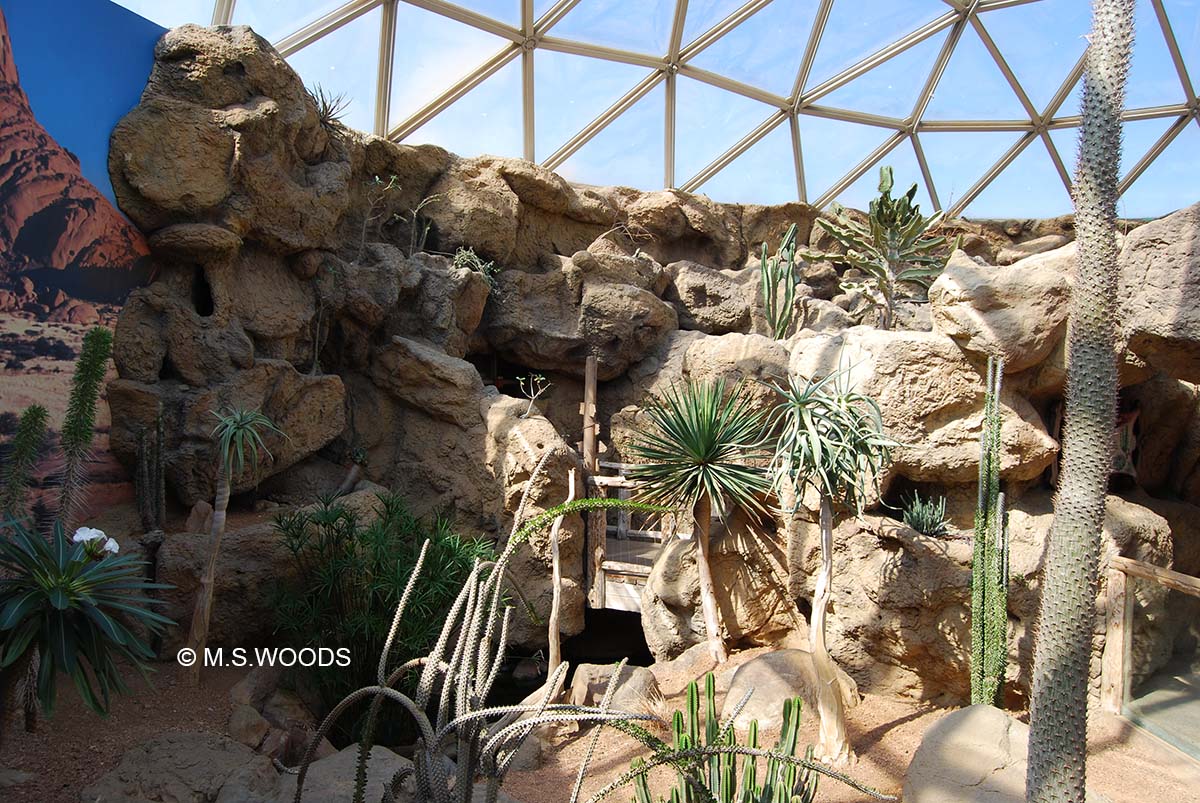 Deserts Biome at the Indianapolis Zoo

The Plains Biome – This area contains such crowd-pleasers as zebras, giraffes, kudu, kangaroos, baboons and lions. Along with its grassy expanses that provide just the right grazing habitat for the animals that live there, the Plains Biome includes waterholes and ponds for crowned cranes and storks. All of the areas within this biome are accessible along the visitor trail.

The Encounters Biome – Yet another human-animal interactive area in the Zoo is the Encounters Biome, where you can meet and talk to zookeepers, as well as pet a pony, goat or llama. A definite favorite with Indianapolis children.

The Indianapolis Zoo offers lots of great rides and attractions year round. Here’s a list, with a brief description of each:

White River Junction Train Ride – A 10-minute adventure giving visitors the chance to view the Zoo behind the scenes.

Kombo Family Coaster – A roller coaster ride made up of safari jeeps; fun for the whole family and a great view of the park.

The Carousel – A perennial family favorite with a twist: all the animals are one-of-a-kind, hand carved zoo creatures, such as seahorses, dolphins and polar bears.

The Pony Ride – Find the ponies in the Encounters Biome, available for the little ones to ride as weather permits

Splash Park – Make sure you bring your bathing suits or at least some extra clothes for this spray-nozzle and water jet fun-filled favorite!

The Zoo sets aside specific hours every day for planned activities, from elephants bathing and penguin feeding to the popular baboon and walrus chats.

Every year, the Zoo plans and executes wondrous touring encounters such as an adventure-filled trip to Kenya or an unforgettable jaunt to see the Taj Mahal. Trips are changed on a regular basis.

Groups get great discounts at the Indianapolis Zoo! A group of 25 or more will receive a full 20% discount with reservations.

The Indianapolis Zoo camps are some of the most popular outreach programs the Zoo offers and regularly sell out early. Camps offer special supervised daycare and fun organized activities for kids in 2-day, 3-day or 5-day formats.

What’s the Zoo like after dark? Kids can find out through the “Nocturnal Adventures” and “Bunk for a Badge” scout programs.

One of the distinctive outreach programs instituted by the Indianapolis Zoo is their Indianapolis Prize, which is a special award for animal conservation consisting of a $100,000 cash prize and the Lilly Medal. Eli Lilly and Company provided funding for the 2006 and 2008 prizes. This prize is awarded every two years to a conservationist who has made substantial contributions benefiting an animal species or group of species.

The Indianapolis Zoo is fully accredited by the Association of Zoos & Aquariums (AZA), the national zoo membership organization of the United States. As an active participant in the AZA’s programs, the Indianapolis Zoo takes part in their Species Survival Plans as well as their various conservation and research programs. In this way, the nation’s zoological gardens bind together with the common goal of helping each other help other living beings.

Another group that supports the Zoo’s efforts is the Polly H. Hix Institute for Conservation and Research, which funds research in Tanzania to protect important migration corridors, among other projects.

Apart from all these programs, the Zoo works alongside the IUCN, the World Conservation Union, and the MacArthur Foundation, on projects for conservation and the documentation of the effects of the world’s changing climate on species and habitat.

One of the Zoo’s most-heralded accomplishments is the successful artificial insemination of an African elephant, the first in the world, as part of their campaign for aiding the survival of the majestic African elephant. 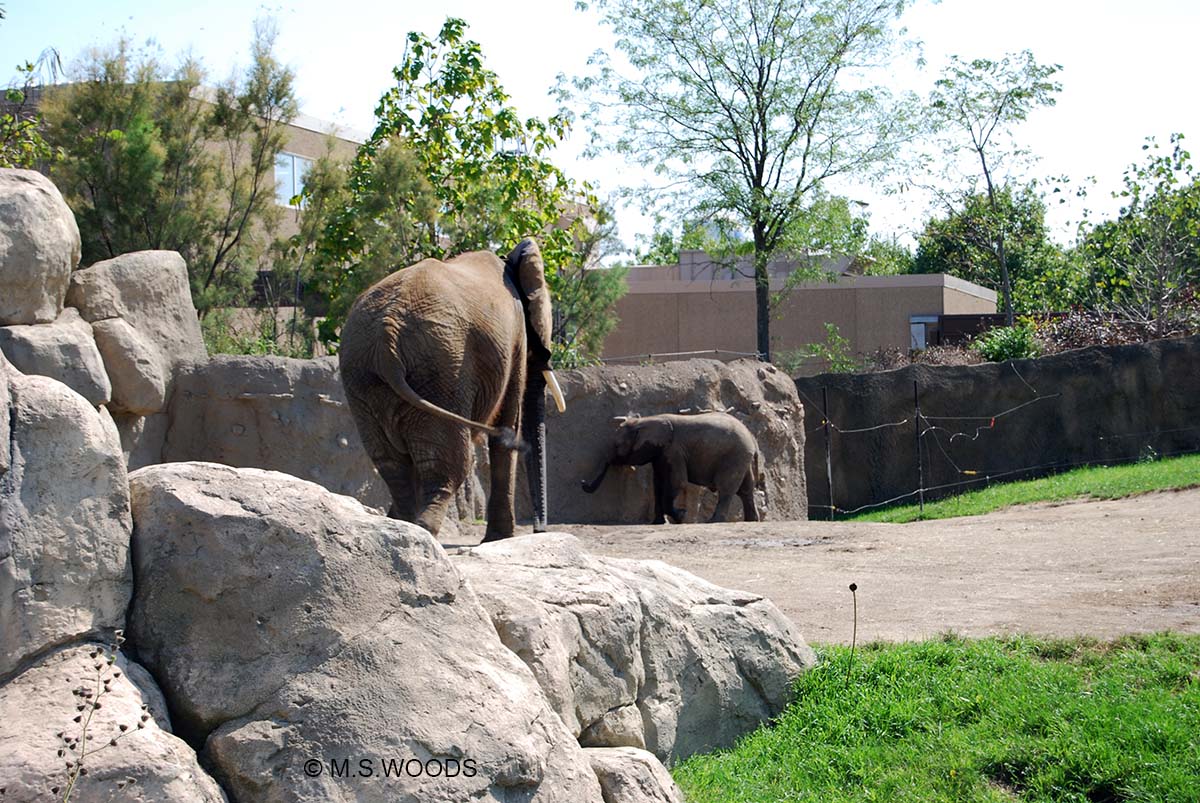 Elephants in the Indianapolis Zoo

Always a leader in innovative and imaginative ideas for community outreach, the Indianapolis Zoo has a well-developed program that takes zoo creatures to the various schools in Indianapolis and Central Indiana.

You and the Zoo

The Indianapolis Zoo encourages groups to visit. They are well versed in creating the perfect, problem-free group event, whether it’s a company picnic, a birthday party or a never-to-be-forgotten wedding.

Inhabiting a sprawling 3.3-acre property in beautiful White River State Park, the White River Gardens are a botanical inspiration. Year-round displays of over 1,000 varieties of plants, plus many special exhibits and events make this stunning botanical garden one of the most inspiring showcases in the state of Indiana.

The Indianapolis Zoo hours vary by season, but generally operate from 9am to 4pm with extended hours in the summer months. Visitors should call the zoo phone number to inquire about specific times of operation. The Indianapolis Zoo membership packages are a great way for your family to enjoy the zoo, while in turn showing your support for the wonderful exhibits and exciting programs the zoo offers. Family memberships start at $99 and include zoo admission and access to special zoo events and promotions.

For more information on the Indianapolis Zoo, please visit the zoo’s homepage.