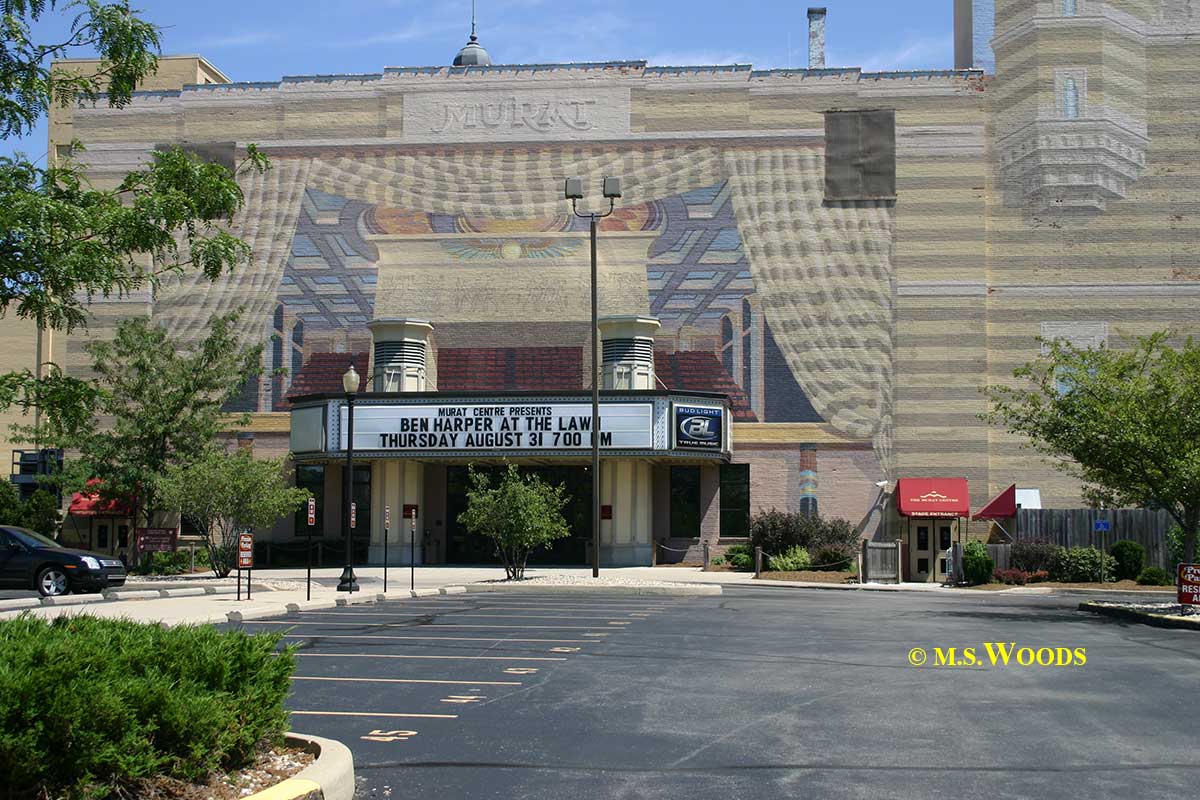 The Murat Shrine Temple, built in 1909, is now home to one of the most popular live music and Broadway production venues available in Indianapolis. Five local masons dreamed up the facility in 1882 and opened its doors to the public on February 28, 1910, with a total investment of only $365,000, making it an important piece of Indianapolis history.

Architectural design influence came from extensive studies of ancient Egyptian and Arabian culture. Dubbed the Murat Centre until 2010, the building is now known as the Old National Centre and boasts gigantic towers, roofs made of copper, intricate brick patterns, stained glass windows and arched entryways and halls throughout. Many who visit the structure comment on the extensive attention to detail, and the aura of being in the presence of foreign lands and history.

After it became clear that Indianapolis indicated rising interest in live performances, an addition was built onto the Murat in 1922. The new performance stage and audience seating was housed in the Egyptian Room, which almost doubled the size of the building. Dripping in gold and crystal décor, massive chandeliers, colorful hieroglyphic-clad columns and impressive likenesses of King Tut adorn the famous room.

After the war, the Indianapolis Symphony Orchestra was reformed and found a home at the Old National Centre. The ISO performed at this Indianapolis attraction until it moved to the newly built Clowes Memorial Hall in 1963.

Throughout the 1950’s and 60’s, the Old National Centre remained a major venue among Indianapolis theatre sites. Today, it serves as the stage for several Indianapolis performing arts acts, from touring groups and local amateur groups; it has been the site for lots of the best things to do in Indianapolis. The building is a prized recipient of supporting funds from the Lilly Endowment Fund.

The building faced possible abandonment in 1995 before massive renovations improved adherence to present regulations for emergency and disability needs. Increased handicap seating, parking, restroom facilities and additional refreshment stands upped the ante for patrons of the famous hall. World-class sound production and stage lighting were also added, all the while preserving 85% of the original historical architecture. The decorative stained-glass window art, Egyptian-themed columns, sconces, chairs and light fixtures were all preserved during the makeover, maintaining the Old National Centre’s reputation as a living work of Indianapolis art.

Indianapolis music events, Broadway musicals by the national group, Broadway Across America, family-oriented productions designed for Indianapolis children and adults alike, and comedy shows are regularly hosted in the Egyptian Room, the Murat Theater, and the Crown Room.

Broadway Across America is worth a special note here. It is a national theatre company that brings top shelf Broadway shows to the Indianapolis public at the Old National Centre and also at Clowes Memorial Hall, enhancing the Butler University Theatre program and the Indianapolis theatrical experience in general. Some of their past productions include The Lion King, Cats, Wicked, Mary Poppins and Dreamgirls.

The Old National Centre has offered appearances by O.A.R., KT Tunstall, Missy Higgins, Rusted Root, G. Love and the Special Sauce, Ben Harper and Ryan Adams on numerous occasions during its recent history. The Old National Centre is one of the defining pieces of Indianapolis history; it will continue to be a relevant force in Indianapolis entertainment for many years to come.